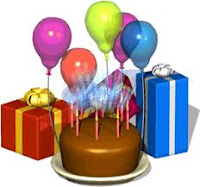 The lovely http://diaryofalagosmum.com/on-my-birthday tagged me in this new Birthday meme (created by Kate at The Five Fs). All you have to do is give a whole load of facts based on the day you were born. This is where Wikipedia comes in handy!
So... Without further ado...

Pick three people who share your birthday and share what you know about them.
Paula Radcliffe, English runner, runs marathons in long white socks which I think help her to run faster!
Jacqueline Wilson, English author, whose books both of my girls have adored, but I find sometimes sad!
Tommy Steele, English singer and actor, oh dear God!!

Is anyone listed as being born on the same day (and year) as you? What do you know about them?
1971 – Alan Khan, South African radio & TV presenter, I know NOTHING about this guy!

List three people who died on your birthday and share what you know about them.
James Hazeldine, English actor (b. 1947)
James Hazeldine (4 April 1947 – 17 December 2002) was a British film, stage and television actor. He was born in Salford, Lancashire.He was best known for his television appearances in London's Burning in which he played Mike "Bayleaf" Wilson from 1986 to 1996. He also directed some episodes. This is quite sad as I used to love London's Burning and I used to live near Salford (although I'm not sad I now don't !)

List three notable events that happened on your birthday.
1718 Great Britain declares war on Spain.
1903 The Wright Brothers make their first powered and heavier-than-air flight in the Wright Flyer at Kitty Hawk, North Carolina.
1989  The first episode of television series The Simpsons, "Simpsons Roasting on an Open Fire", airs in the United States.


Tell us about a holiday that falls on your birthday.
National Day (Bhutan)  The National Day is a designated date on which celebrations mark the nationhood of a nation or non-sovereign country. This nationhood can be symbolized by the date of independence, of becoming republic or a significant date for a patron saint or a ruler (birthday, accession, removal, etc.). Often the day is not called "National Day" but serves and can be considered as one. The National Day will often be a national holiday.


I am tagging the following to share with us what happened on their birthdays!
http://stitchesandstretchmarks.wordpress.com/
http://www.thesardinetin.com/
http://lifeisapileofironing.blogspot.co.uk/


(Sorry if you've already been tagged!)

Don't forget to link up at The Five Fs